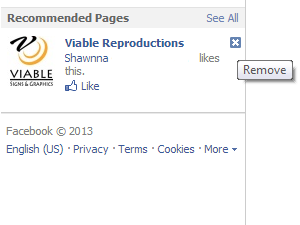 The recent rise in complaints about the number of ads Facebook is forcing upon users that use their mobile app has forced the company to respond. The solution? Now you can simply hide the ads you see.

Although not all ads are included in this new feature, many types of ads are. iOS, Android, and the mobile Web version of Facebook now allow you to click in the corner of an ad and simply “hide” it if it’s in your way. The desktop version of this feature has been available for almost half a year now, though Facebook notes that many people “don’t bother” to hide the ads in the first place. It’s even easier on the desktop version – simply click the “x” in the corner.

But this is just the beginning of the solution to “annoying Facebook ads.” Within the next month or so, Facebook plans to start offering the “x” out button not only for those ads on the newsfeed, but for those that try to get people to install more apps and for those ads that tell you that your friend has “liked” a page.

These features are going to find themselves on the iOS platform first with Android and the mobile Web following a few weeks later.

Facebook says it’s about giving people control over what they get to see on their feeds, and these new features are even more important because of the waning body of people who appreciate and use Facebook on a consistent basis. Targeting has become one of the main goals of the social media company, hence the announcement about “custom audiences” that should lower the number of “x-out” rates the site experiences by a significant amount.