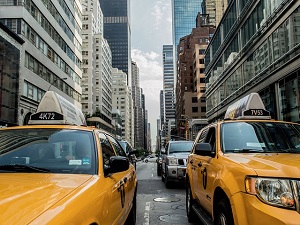 You may not be familiar with the name Travis Kalanick. He’s the CEO of Uber, one of the major players in the “Ridesourcing” craze. The idea is that if you need a lift somewhere, you download Uber and place an order. One (and possibly several) of Uber’s legions of drivers will send out a response, indicating their availability and rate. Pick the one you want and go. Mr. Kalanick has predicted that Uber’s existence will make widespread car ownership a thing of the past, because it simply won’t be necessary.

So far, of course, that prediction has not come to pass, but it’s safe to say at this point that Taxi services are coming under increasing pressure because they’re simply not able to compete effectively. In an extensive survey, it was found that more than 90% of Uber and Lyft users had to wait less than five minutes for a ride. Almost none had to wait longer than twenty. When you contrast that with the stats of the Taxi companies, it’s not even a contest. A mere 40% of Taxi users got their ride within five minutes. Many had to wait longer than twenty minutes, and some never got a ride at all.

The Business Case For Uber, Lyft, And Others

There are times when renting a car for your business is not the ideal solution. If all you need is a short hop from one location to another, the paperwork involved in a rental can take longer than the actual trip, making it impractical, even if you’ve got a standing arrangement with a rental company. If you don’t, then don’t even think about it for short “there and back” trips.

Sadly, the state of American public transport leaves a lot to be desired even in the best of circumstances. It’s just not something we’ve chosen to invest heavily in. Whether that is in large part because of the dominance of car culture in our country or something else, it doesn’t really matter. At the end of the day, relying on public transport to get you where you need to go can be, depending on the metro area, about like waiting on the street corner for a unicorn to show up and offer you a ride on his magic saddle. It’s simply not something you can even plan around.

Let’s face it, in business, time matters. If you haven’t got a vehicle available, renting is impractical, and public transport leaves a lot to be desired, then your only choices are to pick up the phone and call for a cab, or go the route of Uber and Lyft.

In most cases, time is more important than money. Even if you have to pay a bit more for a ride from one of the Ridesourcing companies (and you may not – their prices are extremely competitive with the traditional Taxi services), it’s worth a bit of extra expense if you know you won’t have to wait around for an inordinate amount of time for a ride that ultimately might not show up at all. You’re too busy to deal with headaches like that, which is why these services are growing like weeds.

The market hasn’t even come close to reaching a saturation point yet. We are still in the fairly early days of Ridesourcing, so expect the rampant growth of companies like Uber to continue for the foreseeable future. You may or may not need their services often, but when you do, companies like these two can generally offer you a better, faster, more convenient experience for a comparable price.

One of the first secrets of business success is to do what makes you money and stop doing what doesn’t. Wasting time waiting on unreliable transportation can cost you big time, so if you haven’t considered using one of these services before, perhaps now is the time.