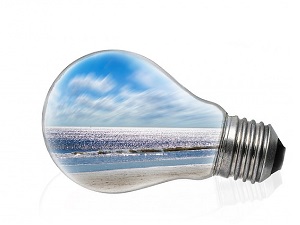 Technology is a wonder. In today’s world, there are a staggering array of “green” devices and techs you can use to dramatically reduce your company’s energy bills. In fact, if your state has “Net Metering” laws, you can actually turn your electricity into a profit center, rather than a cost.

One of the drawbacks of alternate energy solutions has always been its somewhat unreliable nature. Solar panels only work at peak efficiency when the sun is shining. High efficiency windmills only work when the wind is blowing. Because of that, anybody interested in alternate energy has had to invest in battery backup arrays, which add around 125% to the cost of the system. That’s right, storage more than doubled the cost.

Many states have gotten around this problem with Net Metering. What that means is, you stay connected to the grid, and when you’re producing more power than you can use, you feed it into the grid, and your electric meter runs in reverse. On days when you’re not drawing enough power from your alternative sources, you can make up the difference from the grid. At the end of the month, if you’ve put in more than you’ve taken out, you get a check from the power company, and no expensive battery array needed.

That, plus China’s big push into the Solar Energy industry have driven costs down dramatically. Solar is now quite competitive as compared to traditional forms of power generation. With that in mind, here are some fantastic ways you could radically reduce, or even eliminate your company’s energy bills.

This one’s easy and a no brainer. You’re not using your rooftop for much of anything anyway, why not put it on the payroll? The panels can be set up by a hired crew, and other than a bit of bumping and thumping about as they get things situated for you, it won’t impact your work environment in the least.

This one’s a bit more disruptive, and you’ll need to do it in stages so as not to create a parking nightmare for your employees. The basic idea though, is that you build a series of aluminum “shades” that cover all the parking spaces in your parking lot. This is great because then everybody’s not fighting for that one shady spot under the tree. Everybody gets to park in the shade, and it’s good for the paint jobs of your employees cars. Best of all, you can then install solar panels on top of your new shelters. As an added refinement, you can sprinkle in electrical charging ports on the shelter posts for your employees who are driving electrics. Wins all around.

There are devices being made right now that can tie into your building’s power system and perform advanced monitoring. This is important because of transformers. Transformers are those mysterious black boxes affixed to so many power cables that run printers, laptops, and a variety of devices often found in an office setting.

You’ve probably noticed that even when your equipment is powered off, those black boxes are still warm, if not outright hot to the touch. The reason is that they’re still drawing power, even when the device itself is not running. Devices like the “Energy Buddy” and “Kill-A-Watt” are designed to monitor things like that, and will cut power to those devices when the equipment they’re running is off.

You might not think it would matter, but in the aggregate, that can equate to an enormous net savings, and when used in tandem with the other energy savings techniques, and the two ideas for generating your own power mentioned here, it can be a game changer.