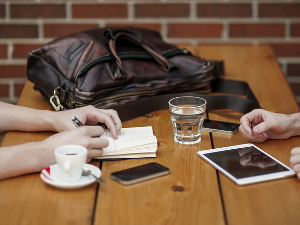 Taking a page from the playbook of the late Steve Jobs, Tim Cook set the Apple world on fire with their latest product announcements. The event was attended by legendary musician Bono, who joined Cook on stage at various points during the announcement. The presentation was carried off with the usual Apple flair; and featured high production values but was short on particulars.

Here’s What We Know

The new iWatch will be released in early 2015, with a price point of $349. That will make it the most expensive smart watch on the market, fully a hundred dollars more than that Moto 360. Cook told the fans in attendance that he personally uses his iWatch as a remote for his TV, and one of his coworkers uses his as a viewfinder for a camera, while another uses it as a walkie talkie. He was quick to add that the developer pool would be designing apps to extend the uses of the iWatch that “none of us have even imagined.”

That’s a canny strategy. Did you see what Cook did there? He didn’t explain exactly what you could do with the device, but he did toss out a few uses and dangled the promise that the developer community would get busy designing a plethora of “killer apps” to make the iWatch an indispensable tool. Will Apple be the company to finally bring the smart watch mainstream? Time will tell, but it certainly seems that they’ve got a strong offer.

To underscore the usefulness of the iWatch, he hinted at a robust suite of developer tools, along with some fantastic sounding fitness tie-ins. Fitness alone won’t bring the smart watch into the mainstream, but it is an important first step.

The iPhone 6 Features A Bigger Screen – As Predicted

Regarding the iPhone 6, the biggest thing is the new larger screen size. This was pretty much as expected. After all, many of the iPhone’s competitors have since eclipsed the iPhone 5 in terms of screen real estate, so in this regard, Apple is playing a bit of catch up. Even so, it was news that was very well received by fans of the company. Hand in hand with the release of the new iPhone is the new OS. This also, contained no real surprises, but one thing that did ignite some excitement was Apple’s new payment system.

This is a big step for Apple, and it puts them squarely in competition with some big, well established players in the space. Note that Google has gone down this road with their Google Wallet, and has struggled to gain any kind of foothold against the likes of Paypal, so it will be interesting to see if or whether Apple sees more success. They do have a built in customer base, however, since it is all but certain that Apple’s payment platform will be the dominant one in use in the iTunes store.

Speaking of iTunes and music, Bono’s appearance on the stage was foreshadowing of another announcement. At the end of the presentation, Cook made the announcement that U2′s new album, “Songs of Innocence” would be made freely available to iTunes store users.