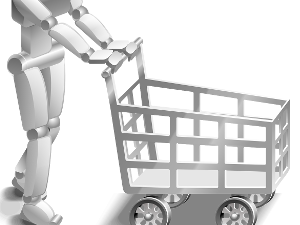 Amazon is not known for sharing great details about its device sales or customers but one thing is definitely clear – Amazon sells and ships a lot of packages. They ship so many packages that recently they have been able to grow and raise the free shipping threshold to $35. Amazon’s shipping business and other services have grown so much that the company announced that its revenues reached an impressive $17.09 billion and are up 24% over last year. Clearly, Amazon is doing something right.

With all these sales comes the need to find better ways to move merchandise through their various warehouses around the country. In addition to an impressive army of human employees, Amazon has been experimenting with various automated delivery systems such as drones designed to reduce shipping times, and has also recently announced the use of robots in their warehouses. These robots are called Kiva robots, and they’re designed to move product and assist employees with unloading and loading of goods.

With the announcement of their latest earnings, Amazon also made the interesting announcement that they will be employing 1,382 Kiva robots in three of their fulfillment centers. The company that created these handy little robots was scooped up by Amazon just last year and it seems they are now trying to cash in on that investment as they deploy these small robots to help them fulfill orders much faster. The small robots move stacks of merchandise around their fulfillment centers with ease, allowing the human employees they are assisting to focus on other tasks so your orders are filled more quickly.

What About Large Packages?

While the Kiva robots are quite useful for the movement of smaller merchandise, Amazon also ships and handles a great deal of larger products as well that simply cannot be moved with the smaller robots. In order to assist its employees with the larger products, Amazon has deployed Robo-Stow arms to help them move these larger products through the warehouses with relative ease.

When one of the larger trailers full of merchandise comes in, it would normally take humans hours to unload and route these products where they need to go. In order to improve this time, the company has deployed new vision-based systems that assist employees with the process reducing the time from hours to a mere thirty minutes.

While only deployed at three of its fulfillment centers around the country, experts believe this is just a test of their effectiveness and if they are successful, Amazon is expected to roll out more and more of these robots around the country as it continues to work on decreasing shipping times on all of its orders. Humans continue to play an important role at Amazon and the company continues to hire impressive numbers of workers each year. This trend isn’t likely to change in the near future as the robots currently aren’t designed to replace the need for humans in their warehouses. They are there to simply assist the workers with their orders as the company speeds up delivery even under the busiest of shipping seasons.