Keep Your Keyboard Clean For a Healthier Workplace 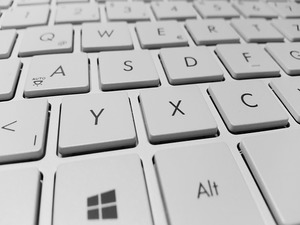 Time for a little news of the gross, but the good thing is, hearing this report could make your office a healthier place to work. Recently, a British microbiologist did a comparative study, swabbing a toilet seat, and comparing the amount of microbes found there with the number found to be living in keyboards. The results weren’t pretty.

A total of five keyboards were swabbed. Four of them were found to have more microbes than the toilet seat. Five times more, in fact. Interestingly, either the biologist was at an exceptionally clean office, or British desks are significantly cleaner than American ones. A similar study conducted in Arizona found that the average desktop had a staggering four hundred times more.

Unfortunately, we’re fairly bad at keeping our keyboards clean. Surveys indicate that only about 50% of workers clean their keyboards and desktops once a month or more. The sad part is that keeping them clean is really easy to do, and there are a variety of options that will get the job done. You can use a keyboard vacuum, canned air, or a Q-tip dipped in alcohol to clean the keyboard. These methods will allow you to will blow out the particles and gunk that build up between the keys of your keyboard, and make it a less hospitable place for microbes to thrive.

Using one or all of these tricks once a month can reduce your chances of illness by as much as 20%. You may not have thought about it, but dirty keyboards actually can cost your business big money. Each year, productivity losses due to illness cost businesses in the US a staggering $576 Billion dollars. Something as simple as regularly cleaning the keyboards and desktops in your office can play an important role in reducing that number.

Help keep your workplace both safe and healthy. Build a scheduled, regular desktop and keyboard cleaning routine into your company’s chores. Your employees will be healthier, and it will save you money in the long run.