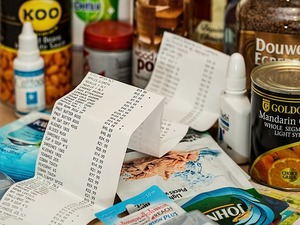 For many months, Amazon has been planning to take the retail game to the next level. Their ambitious plan first became visible with the inclusion of mysterious “Dash Buttons” on various classes of products. Mysterious, because at least until now, those buttons didn’t actually do anything. Clicking on them would get you absolutely nothing. Quietly, and behind the scenes, Amazon has been partnering with a number of vendors to put teeth into their plans.

Ultimately, what makes this plan possible is the emergence of “smart” appliances. Your smart refrigerator, for instance, can be programmed with its contents as groceries are loaded into it. As you use things from the fridge, it keeps track. Tying the refrigerator inventory to your Amazon account would allow an order to be automatically placed on your behalf, and replacements for the items you have used automatically show up on your doorstep.

The same is true of many other appliances. GE, for instance, now makes a dishwasher, where the detergent can be pre-loaded into it, with a portion being dispensed every time the machine is operated. Using Amazon’s new API, sensors in the unit’s fill tank can automatically re-order detergent, once a certain threshold has been reached, and your supply begins to run low. Again, the replacements you need simply show up at your door, exactly when you need them.

There are a whole range of products, spanning more than forty different manufacturers at last count, all beginning to make use of the new API, and the opportunities it represents. Everything from printers that can reorder their own ink supplies, to smart blood glucose monitors that can have lancets and testing strips shipped in, without any additional input from their human operators.

Ultimately what we’re talking about here is a retailer that is increasingly able to anticipate needs, and fulfill them, with no intervention or prompting by humans at all. It’s an extremely exciting prospect. Stay tuned, as there will be much more to say about this topic in the months ahead.